Registration begins May 21, 2018.  Read below for more information and course descriptions! 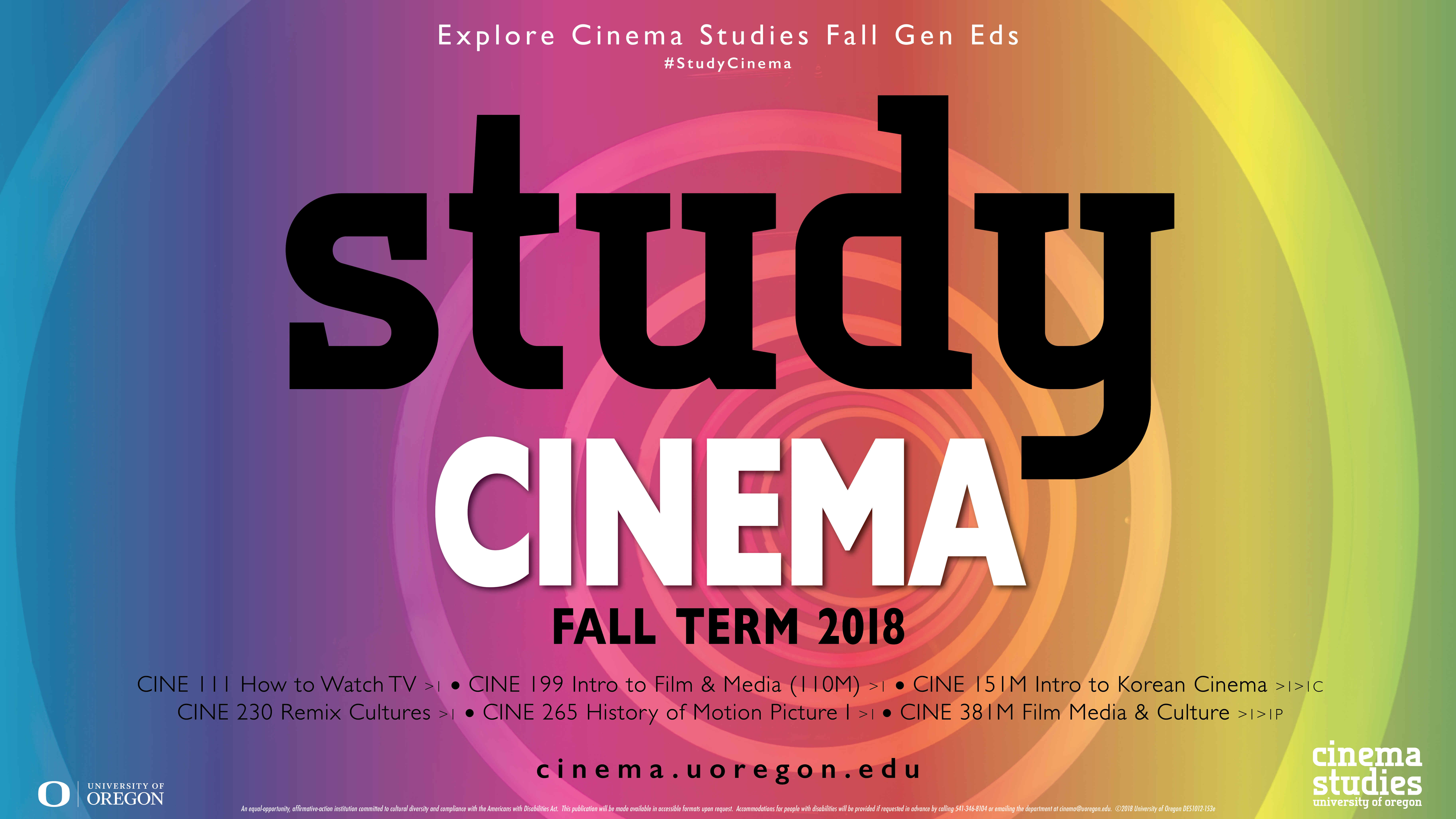 Courses below are open to all majors!

Cinema Studies Majors:  Visit the course list page for the complete list of courses and how they satisfy the major.

With the rise of viewing practices like “binge-watching,” the increased respectability of “quality” television, new content producers like Netflix and Amazon, and technology that allows you to watch your favorite programs on anything from a 5-inch smart phone to a 50-in HDTV, how we watch television is rapidly changing. It’s easy to get swept up in these changes, but one thing will always remain the same: the need for media literate viewers who can talk, think, and write intelligently about what they see on-screen. This course will teach you how to be a critical and informed television viewer, even as the very concept of television is being redefined. In doing so, you will deepen your understanding of specific television texts by using formal and ideological analysis and you will learn to situate those texts within different contexts of history, industry, technology, and reception.

This course is a survey of Korean national cinema, from the earliest days of the medium to the present. By exploring a range of issues that have come to define the concept of Korean national cinema, this course will not only serve as an introduction to Korean cinema, but more importantly as an in-depth case study that challenges and expands the discussions of national cinema. Films will be screened with English subtitles. No specific knowledge of Korea/Korean or prerequisite is required. Previously taught as KRN 151; not repeatable.

This course will introduce you to the formal and narrative study of film. We will focus on film history, the technology of film production, and the methodology of film studies as an academic discipline. Along with film itself, we will pay particular attention to the cultural, political, and economic contexts from which it emerges. To emphasize—and unpack—the formal conventions of narrative cinema, much of the required viewing falls within readily identifiable genre categories (i.e. crime and horror), but we will also analyze experimental, realist, and documentary films. Previously taught as ENG 110; not repeatable.

In "Remix Cultures," students learn the historical, practical, and critical views of "intellectual property" (IP) by analyzing everything from the UO mascot to Jay-Z. The course highlights how “ideas” are part of a remix continuum: new ideas often remix the great ideas that preceded them and will themselves be remixed in the future. Students will deconstruct the relationship between politics and economics and interrogate the everyday ways that their lives are governed by (and often break) IP laws. As a group-satisfying Arts and Letters course, Remix Cultures provides students with a broad yet fundamental knowledge of how "IP" and "innovation" impact their lives: students of all majors engage with intellectual properties daily and may seek professions in fields that valorize intellectual property. By asking all students to actively and critically engage consumer media culture as intellectual property, the course provides a better understanding of how collaborative efforts are governed by laws that typically value and reward a singular author/genius.

CINE 265 (Previously ENG 265) is the first in a three-part chronological survey of the evolution of cinema as an institution and an art form. CINE 265 moves from the origins of cinema in the late 19th century through World War II. The primary texts for the course are the films themselves, but supplementary readings will also be assigned. The aim of the course is to develop interpretive skills relevant to the study of film by examining the history of major movements in Hollywood and world cinema. As a broad introduction to interpretive, theoretical, and institutional issues that are central to the study of film, CINE 265 satisfies the university's Group Requirement in the Arts and Letters category. The courses in motion picture history, CINE 265, 266, and 267 may be taken individually or as parts of an integrated sequence. Previously taught as ENG 265; not repeatable.

This course introduces students to critical thinking about the historical and economic factors influencing film, media, and cultural production. Unconventional textual and contextual dynamics, understood as queer history, are the focus of the course. The framework we explore draws on critical approaches to race, ethnicity, class, education, and ability. Our goals are to discuss the power relations and unpredictable signifying practices involved in taste stratification and family norms; erotic possibilities and gender differentiation; art, marketing, advertising, and genre; capitalism, celebrity, censorship, polysemy, and interpretive texts; and the university industrial complex (i.e. socialization through education). We examine fiction, feature film, experimental media, and more. Readings are about the entertainment business, aesthetics and interpretation, and queer transgender culture. Previously taught as ENG 381; not repeatable.