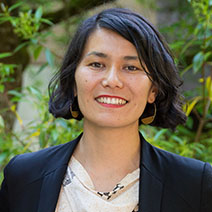 I’m a Los Angeles-born filmmaker, who divides my time between Oregon and LA. My work integrates issues of race, class, gender, and what it means to be an immigrant across multiple modes of filmmaking. I’m interested in exploring these issues through techniques of realism to reveal the complexity of the human experience. In the past, I’ve been a selected director in the Francis Ford Coppola One-Act play series. I also received a fellowship from LA’s Visual Communications, which supports emerging Asian American filmmakers and was supported by the Panavision New Filmmaker’s grant. In addition, I’ve participated in Film Independent’s diversity program, Project Involve. My work has screened at various venues, including the Rotterdam Film Festival, Los Angeles County Museum of Art, LA Asian Pacific Film Festival, Portland International Film Festival, and the National Museum of Women in the Arts.