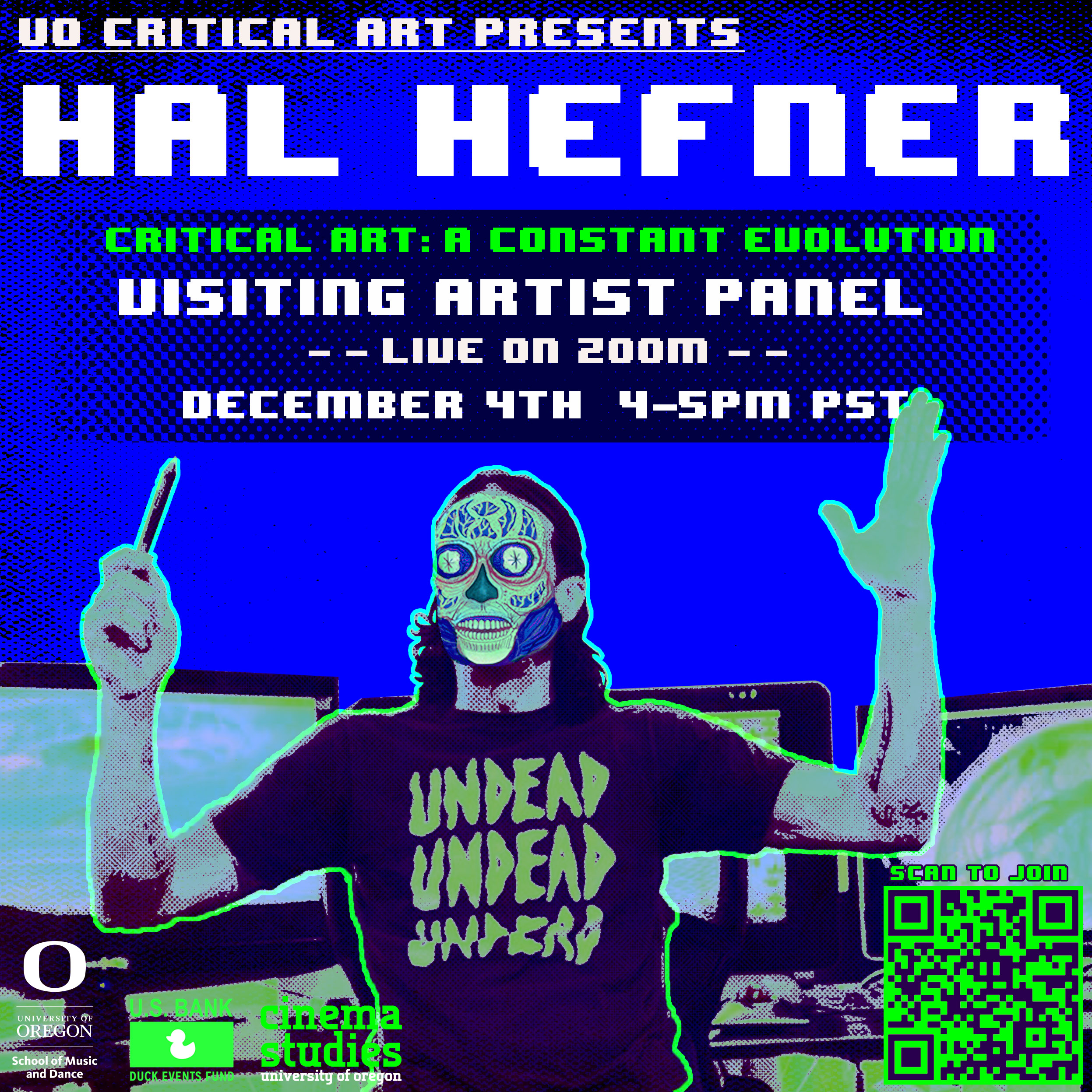 The UO ©ritical A®t Show presents Hal Hefner from 4-5pm on Friday December 4 for a workshop called Critical Art: A Constant Evolution, which will be followed by a short Q&A. Hal is best known for his CONSUME series of illustrations, many of which have been shown at our annual show. The talk will be livestreamed from the UO ©ritical A®t Show website home page and will coincide with the launch of the virtual 4th Annual UO ©ritical A®t Show, which is an event that brings together student and community artists. More information will be available soon.

These events are organized and curated by a group of 20 first-year students in a FYP (first year program), the FIG Assistant, Ellie Reisman, and their instructor André Sirois (DJ food stamp).

I AM HAL.
An artist by birth, a storyteller by soul, I use award winning illustration, design, writing and strategy to create digital and physical experiences. My goal is to make meaningful work that inspires others. I am the founder and creative direction behind CATMONKEY, a multimedia studio in Los Angeles, CA.

ARTIST & ILLUSTRATOR
As an artist I am most recognized for my pop art series, CONSUME which has been shown in galleries all over the world. CONSUME is a social commentary on greed, corruption, narcissism, materialism, consumerism, hatred & bigotry. The CONSUME series has been shared all over the internet millions of times and has been covered by multiple news outlets, art, geeky, political sites and more. It is my artistic weapon.

My CONSUME pop art series has been shown in galleries all over the world. In 2016 the CONSUME series, was an integral part of the Shangri-La portion of the Glastonbury Festival.  Shangri-La has been described as, " a lawless, Mad Max-ian wonderland where anything goes," by NME. By artistically focusing on the BREXIT event which happened during the festival, I was able to generate a lot of buzz and emotion. Shangri-La was branded with CONSUME and it was used to enhance the concept of the venue which was, "Media Hell, truth and lies."   Using printed posters, banners, video and animation the CONSUME series joined forces with other artists such as Shepherd Fairey, Darren Cullen, Pref, Steve Cutts and many more. It was an honor to be a part of something so special.

As an illustrator I have worked on all sorts of digital and print media for: Books, Games, Video Games, Magazines, Comic Books, Posters, Storyboards, Concept Art, Trading Cards, Pitches for Ad Campaigns and more. As an illustrator I am known for my work in the indie comics industry. I wrote and Illustrated Heavy Metal Magazine’s first webcomic, Gates. I have also produced other comic series such as Tales of Honor, an Honor Harrington series for Evergreen Studios.

CREATOR + WRITER + STRATEGIST
In 2014 I created an intellectual property that involved an Alternate Reality Game (ARG) that contained a multitude of branded content centered around an ancient cult. I sold this IP to acclaimed author James Frey and it’s being absorbed into the universe for his trilogy of books and movies called Endgame. In partnership with James Frey and Google, I consulted in the development of the evolution of the property within the the Endgame universe.

Specializing in the entertainment industry, my strategic ideas are brought to fruition through art, design and writing that spans the gamut of content creation including videos, web series, short films, comic books, animation, and a plethora of other digital marketing experiences and their coinciding social media campaigns. In addition to creating the ideas and strategies that form the foundation of these campaigns, I also carefully build teams for the very specific needs that each project presents.As a creative strategist for Ridley Scott’s, 3AM I was very honored to help in creating award winning meta stories and supplemental content for blockbuster films, such as the Martian, Miss Peregrine’s Home for Peculiar Children, War for the Planet of the Apes and more.