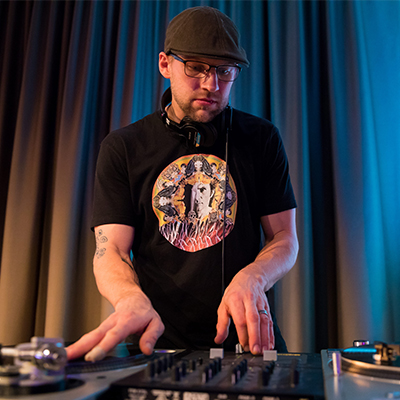 Peace, what's good? My name is Andre´, aka DJ food stamp, aka The Real Dr. Dre´. I've been a fan of or involved in music and screens since the 80s. I have almost 25 years experience of filmmaking (like with film), photography, sound recording/editing, DJing and beatmaking. I'm self-taught, and bring that DIY approach to my teaching. Beyond my teaching and role at UO, I'm a local DJ, I'm a board member on the Eugene Film Society, and I run a bi-annual record show, the TOP SCORE Record Show.

The bulk of my research broadly looks at the nature of technical and cultural innovation in general in relation to intellectual property law. Specifically, I look at DJ culture and technology as an example of how creativity is the byproduct of a network of people, products, brands, etc. My work addresses the relationship between DJ culture and the industries that serve it, and focuses on the manipulation, exchange and rights associated with intellectual properties in this context.